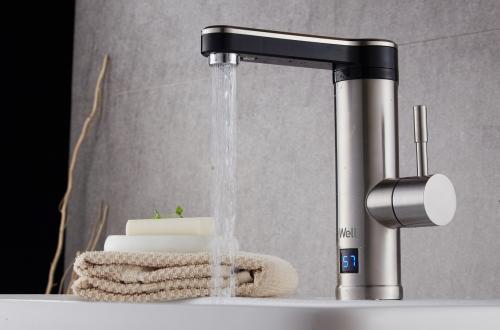 Appearing two decades ago, but only performing in the last decade, instant water heaters have now taken to a new level. They have been miniaturized and are now integrated into bathroom or kitchen sinks.

The concept does not have a definitive name. Boiling Water Taps. Instant hot water tap. Hot water dispenser. Boiling water tap. All are variants in which the new concept is presented in the big online shops, sometimes even in one and the same store.

There are already integrations with other water filtration devices, such as the 4-in-1 instant faucet from Franke. The new Minerva 4-in-1 Instant Boiling Water Tap from Franke is the one tap that delivers not only hot and cold mains water but also cold and boiling filtered water. Not nearly boiling water like many kettle taps, really boiling at a full 100°C. Nothing less will do to quicken up cooking and brew the perfect cup of tea.

Another interesting integration come from Quooker. The instant hot water tap can be integrated with CUBE segment, which make instant soda. The new function makes life in the kitchen even easier. It saves you time and space, it means you no longer need to use plastic bottles and it is completely safe. To dispense sparkling water, press and turn at the same time. The illuminated ring that turns red to indicate boiling water now flashes blue: sparkling water comes out of the tap. And if you hold down the button for slightly longer and then turn it, you get filtered water. So it’s impossible to dispense boiling water when you want sparkling water.

Usual prices are from 500 to 1000 euro. Some cheap versions are available well below 500 euros. Aussi, some luxury versions, with top quality finishes and a lot of accessories, can reach 2000 euro.

Vidéo: Minerva 4 in 1 from Franke